Your Guide to Google's Panda 4.1 Algorithm

Google's Panda algorithm update has been shaking up the world of SEO since its first iteration back in 2011. Over the course of 26 confirmed updates and refreshes, the algorithm wizards at Google have been refining the content-focused search engine update and rolling their new features out gradually. Now, the 27th update has arrived, and it's significant enough to be called 4.1. 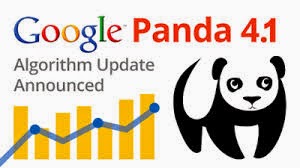 I've written this guide to summarize the most important elements of the Panda 4.1 update, including the motivation behind its release and the potential consequences for online businesses.

Before I get too deep in the mechanics of the new Panda update, it's important to recap the stages of development that have led to this point.

The first Panda update, known as Panda 1.0, was released in February of 2011, affecting nearly 12 percent of all search queries and making it one of the most significant algorithm changes in Google's history. Intended to weed out low-quality content and reward sites with high-quality, actively updated content, the Panda update radically changed SEO strategies from a basis in keyword-stuffing gimmick to a basis in user-focused content strategy.

Following up on that update, Google released Panda 2.0 in April of 2011, affecting about 2 percent of all search queries. Several updates followed on a monthly basis, until the next major update--Panda 3.0--in October of 2011, affecting another 2 percent of all queries. Monthly updates resumed over the course of 2012, but in 2013, those updates slowed to a crawl, with the only officially announced updates hitting in January and March of 2013.

The next major update was in May of 2014, a rollout known as Panda 4.0, which affected approximately 7.5 percent of all English search queries, adding more features to reward high-quality content and detect instances of low-quality writing. Now, we're looking at the rollout of a major follow-up to that update: Panda 4.1.

The rollout began on September 25, 2014, but according to an official Google+ update from Pierre Far, the rollout was a slow, gradual one, planned end in the first week of October. According to Far, the update continues in the tradition of previous Panda updates by identifying low-quality content with more precision. Google has evidently added a few new signals of low quality to its algorithm--but of course, it's not making those signals public.

Depending on the geographic location of the site in question, Panda 4.1 is estimated to impact between 3-5 percent of search queries, establishing it as more impactful than the minor monthly updates that occurred throughout 2011 and 2012, but less significant than the flagship updates of 1.0, 2.0, 3.0, and 4.0.

According to Pierre Far, the update should be good for small- to medium-sized businesses who prioritize the quality of their content. Ideally, the highest rankings of search queries should become more diversely populated with a wide range of different site sizes. This means site owners who have been stepping up their efforts to produce more high quality content should be rewarded with higher rankings as a result of the update.

However, as with all Google updates, there's also a chance to drop in the rankings as a result of Panda 4.1. If any of the "new signals" that determine the quality of the content on your site tell Google that you're not up to their standards, you could suffer a drop--even if you're doing everything else right.

Early analyses are already illustrating a clear pattern. According to SearchMetrics, it looks like the biggest winners of the update are news sites, content-based sites, and download portals. The logic behind this indicates that because these sites are regularly updated with new, (presumably) high-quality information, they're getting an extra boost in favoritism thanks to whichever new ranking signals were added to the Panda code.

On the other hand, the sites that have been hit hardest so far appear to be lyric sites, gaming sites, and some medical content sites. Put bluntly, these sites tend to have thin, repeated, or aggregated content--which to Google, translates to unoriginal or low-quality work. Lyrics sites tend to feature the exact same content as their competitors (since song lyrics don't change from site to site), gaming sites don't have as much content as other platforms, and medical content sites often abuse already-existing stores of content to produce an aggregated store of information.

Specific examples of sites that were hit hard include medterms.com, which saw a drop in almost 40 percent of their search visibility, as well as hallmark.com, office365.com, and eHow.

How to Recover if You've Been Hit by Panda 4.1

If you've noticed an increase in rankings, then congratulations--the Panda 4.1 update has been working in your favor! If, however, you've noticed your organic visits or your search visibility dropping over the course of the last couple weeks, Panda 4.1 could be the culprit. It will take some time before you're able to recover fully, but you can start that path with these steps:

The best thing you can do is perform a content audit of your current site. Take a look at some of your competitors--preferably, some of your competitors who are currently ranking higher than you as of this update. What are their content strategies doing that yours is not? What is yours doing that theirs are not doing? Don't simply mimic their strategies. Instead, try to learn from them and incorporate some new ideas into your campaign.

How often are you updating your blog? How many ideas are original? What types of content appear to be the most useful, and are you providing those? How in-depth does your content get? These are all important questions to answer as you plan out the next few months of your campaign.

From what we've seen so far, it looks like Panda 4.1 has hit content aggregators and duplicators the hardest. Straightforward plagiarism and content syndication have been dealt with already by earlier Panda updates, but Panda 4.1 has become more sophisticated. Are any of your content sources basic rewordings of other articles? Are many of them quote-based, or reliant on outside sources? It's best to get rid of them and focus more on creating unique, original content.

What to Look for in the Future

This most recent update comes approximately four months after the last one we saw, back in May. Throughout 2012, Panda was treated with near-monthly updates, but if this new spacing is any indication, Panda could be on a quarterly updating schedule--at least for the time being. That would put the next update in December of 2014 or January of 2015, and it could carry an additional set of ranking signals.

It's certain that Google will continue to update their algorithm with more sophisticated signals and ranking formulas; it's only a matter of when. But Panda 4.1 is continuing a several-year tradition of rewarding high-quality original content, and it's likely that this trend will only continue. The best thing you can do is refine your content creation strategy and make sure your blog is as original, unique, valuable, and well-written as possible. Publish new, high-quality content regularly, and you'll put yourself in a perfect position for a boost when Panda 4.2--or whatever the next update is--starts rolling out.
Posted by Unknown at 3:46 AM

We are SEO professionals doing freelance SEO projects, We see the long term relationship with our valuable clients.